skip to main | skip to sidebar

I wanted to try more keum-boo on the new PMC Sterling and since I’m down to my last bit of fresh clay, I thought I’d rehydrate some dry clay. 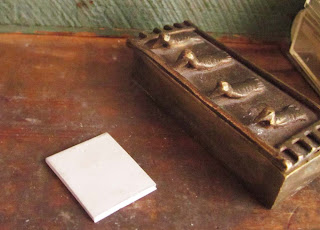 I had a rolled out rectangle of dry PMC Sterling that I’d practiced carving on with gouges. It had been sitting in the open, on a shelf, in my studio since the summer. Using passive rehydration, I spritzed it with distilled water, then stashed it under cover in my super re-hydrator (this crazy plastic gizmo that transports my cupcakes from the super market to my kitchen without mashing the icing). It’s small, airtight, and has a perfect spot to tuck a wet sponge in securely, and it’s free (all I have to do is buy the cupcake).

I call the technique “passive rehydration” because I don’t do anything to the clay I’m rehydrating except put it in an environment in which it can’t help but soak up moisture. If I’m in a hurry I might spritz it once or twice with water but that’s it. I just leave it alone until it’s the consistency of workable clay. If it goes too far, and gets mushy, I pop off the gizmo cover and let a little air intervene. I use this technique with all the clays, both for bringing dry clay back to fresh and for changing or re-forming shapes of dry clay. 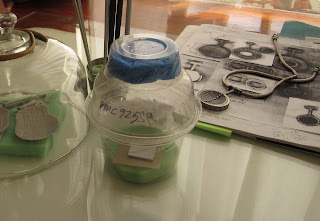 Later that same day, when the clay had returned to a good working consistency, I made two disks, textured on the back, smooth on the front. After air drying, I polished the smooth sides with 600, then 1200 grit micron graded polishing paper and fired them surrounded by 10-15mm of carbon on all sides (1000F for 30 in air on a kiln shelf, then 1510 for 45 minutes in well used, and well proved, coal carbon). I use a stainless steel container with a lid. 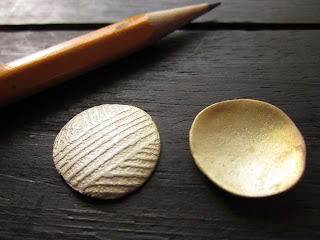 The disks were oxidized from taking them out of the carbon while hot but I’ve experimented enough with alloy silver metal clay to know that it will oxidize when heated and the gold foil will bond regardless; without my having depletion gilded the sterling. Nor does there seem to be much point in cleaning off the oxidation since the Sterling begins turning colors the instant it’s placed on the Ultra-Lite.

I burnished on two layers of 24k gold foil in preparation for the likelihood of some degree of “fade” (diffusion of the gold foil into the surface of the silver) during the sustained heat of soldering. Both layers bonded beautifully, no gaps or bubbles. 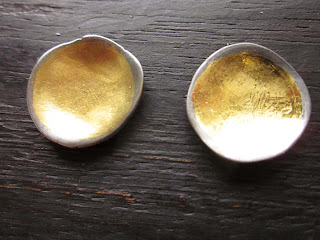 (The disk on the left has been brass brushed. The one on the right has not.) 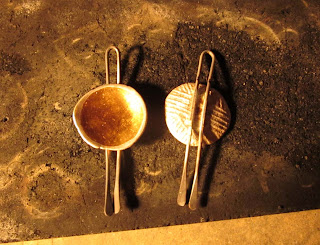 I prepared the disks for soldering by filing the backs to clean metal. I also hammered (to increase surface area) and sanded the bent wires so they would lie flat against the disk backs.

I used medium solder and the soldering was uneventful, no different from soldering any other sterling.

However, even moving as quickly as I did, the gold foil developed some tiny bubbles during the soldering process. This is typical for keum-boo-ed sterling; it does tend to develop little bubbles when reheated. My solution was to flip the disk over as soon as the solder flowed and burnish down the bubbles while the metal was hot. This worked well and no gold came off during subsequent brass brushing. 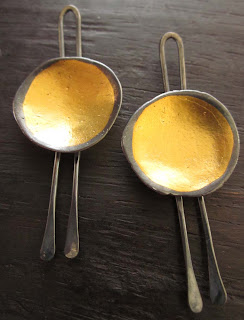 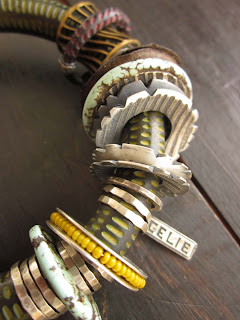 Although I do plan on focusing on rings in the new PMC Sterling, I am also working on other high wear adornments that I think should be made from Sterling clay. Both the silver and the polymer on my bracelets need to be sturdy as they do get bumped around on a wrist.
Pictured here are a group of bracelet decorations I made last week in the new material. Interrupting the edge, as I’ve done on several of the “back to back” lentils is more appropriate in Sterling than fine silver since I’m weakening it with the cuts.

I can’t believe I’m working with Sterling PMC! It’s very exciting and now, as I write, the mail is delivering this same excitement to all of you waiting with bated…

I look forward to hearing your thoughts and seeing your ideas come to fruition.